In recent years, rising healthcare costs have forced companies and organizations offering group benefits to explore new strategies to managing cost and improving claims utilization. Born of the quest to reduce healthcare costs has spawned what is known as Reference Based Pricing (RBP). At its heart, RBP is designed to improve provider accountability, pricing transparency, and more tightly manage coverage costs by tying reimbursement for some services to a specific, predetermined price. This blog describes RBP, how it works, and its benefits.

What Exactly is Reference Based Pricing?

Since many companies have the goal of reducing their overall spend on group benefits, more specifically insurance claims, many organizations are turning to Reference Based Pricing to minimize their claims dollars spent through their insurance program. Different from more traditional networks whose goal is to negotiate a lower fee off the provider’s billed fees, Reference Based Pricing is a ground breaking strategy that differentiates itself from more traditional strategies and employee benefit pricing options.

There is little doubt that the current healthcare pricing model is deeply flawed. Starting from an already artificially inflated foundation, health plans seek to negotiate discounts through contracts tied to specific networks. How do network members really benefit if pricing is inflated from the outset? How do these “discounts” offer real value to the insured?

The answer is in many cases they don’t. In reality, hardly anyone ever pays the marked up “retail’ rates that all the hospitals start with during their negotiations. These costs are intentionally inflated so that the hospital systems can make up for their losses that they experience in their ER’s and collections areas.

Using the RBP strategy, an employer has a better chance of success when aiming to control claims costs by starting with a bottom-up approach to pricing. The biggest benefit comes on claims costs tied to hospital stays, surgeries and other high-dollar services. It’s key to understand that the billed amount from a healthcare provider is not always representative of the true cost of the service provided. Additionally, the cost billed may also not necessarily reflect the true market value of the service.

With more typical health insurance network contracts, each health insurance professional sets a pre-negotiated discount that they’re willing to pay for each and every service. It’s pretty discouraging how much these costs can vary from facility to facility, even in the same region. The bigger the hospital system, the more negotiating power they have with the insurers, so typically the more they get to charge for their services, fair or not.

So….How Does Reference Based Pricing Work?

The sad truth is, in many cases, the percentage increases over the allowed Medicare rate can be much, much higher if the hospital system is a large one with strong negotiating power. The more the insurer needs the hospital system in their network, the higher the “discounted” reimbursements rates tend to be. This causes a great disparity in costs from one facility to the next, even those located in the same region or city.

Let’s say you have an employee who undergoes an MRI, a procedure that usually takes less than an hour. If the hospital’s initial charge for the service is $3000 and the insurance provider has negotiated a 40 percent discount, the final contracted rate would be $1800. Depending on whether the service is covered, and if the patient has or has not met their deductible, the employee could be footing the bill for the entire procedure.

With Reference Based Pricing, let’s pretend that Medicare would pay $600 for an MRI in that same area. The RBP based health plan would then turn around and pay the facility 150% of the allowed Medicare rate, so the health plan in this instance would pay out / allow $900 for the same MRI. That’s a 50% reduction in claims paid / allowed amounts from the RBP plan to the PPO plan.

(Note: all of the numbers in this example are fictitious and for example purposes only, these are not true negotiated rates or RBP reimbursement amounts as these vary from provider to provider and from area to area.) 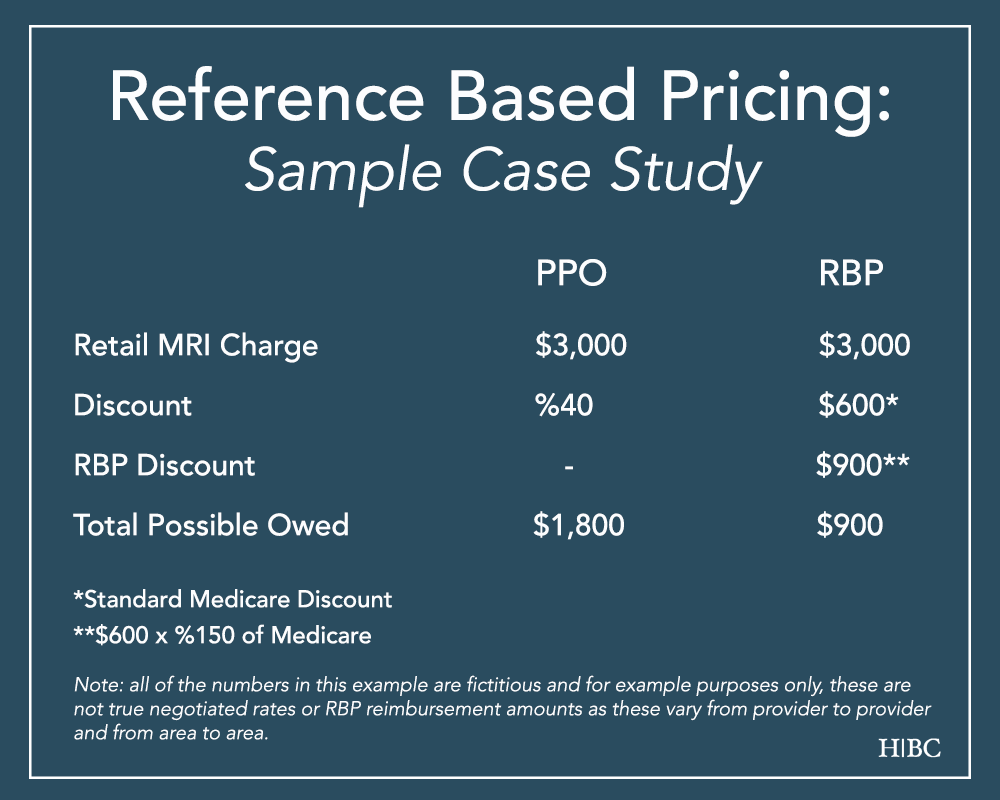 Reference Based Pricing: The Benefits and Obstacles

One of the biggest differences between Reference Based Pricing and traditional pricing models is the cost transparency it provides. Organizations choosing to go with RBP often have more control over the rising costs of healthcare and can deal with cost increases without interfering with their bottom line. Medicare costs are not increasing 10-12% each year like all the insurance companies say medical costs are increasing, which translates into better health plan renewals.

It is important to inform your employees that not all healthcare systems accept capped insurances like Reference Based Pricing, but they are becoming more and more popular. Many city, county and states benefit plans are looking to Reference Based Pricing to help stop the cost increases and high claims utilization. In these instances, it helps these municipalities and their tax payers – which is huge.

With RBP, an employer has the ability to know precisely how much a specific procedure or treatment will cost BEFORE the claim has been processed. This certainty ensures there are no surprise bills after claims have been processed.

Another significant benefit of having a plan with claims paid based on Reference Based Pricing is that you’re removed from the “in- and out-of-network” game. On an RBP plan, you can go see any provider you like! They do have to agree to the terms and allow you to be seen, but in the RBP world, doctor’s offices still get paid a fair amount and, in most cases, RBP based insurers are able to pay claims much faster simply because they do not have to send the claim through the insurers re-pricing system first before paying the claim. Everything is already set, so claims get paid very quickly. Once doctors experience this a few times, they tend to like it!

In the PPO environment, doctors and their staff can get caught up fighting with the big insurance companies for months trying to get paid which is why we see many doctors getting fed up with the insurance world and opting out of some insurance networks.

Again, with Reference Based Pricing cost certainty an employer doesn’t have to risk paying excessive costs for medical services that could be completed more inexpensively. This will translate into better renewals and lower claims spend for the employer, which translates to fewer increases and lower costs for employees, their families and their employers alike.

In the past, Reference Based Pricing plans have been reserved mainly for large employers and large corporate enterprises who could negotiate contracts on their own. However, in present day we are seeing more and more vendors making this strategy available to the small and medium sized employer space which is the space we operate in. Every single day more and more forward-thinking employers are going with RBP and saying goodbye to the PPO discount shell game. Are you next in line?

We hope this information is helpful and helps you realize there are more cutting edges approaches available for those who are willing to be early adopters and take this next step!

Watch Our Video on Reference Based Pricing!

HBC was founded in early 2011 by Ryan Holloway. After serving over 8 years on active duty in the US Marine Corps, Ryan transitioned from being a full-time marine into an HR professional in early 2003. This began a journey and awoke a passion for helping companies who value their employees. After spending time working with a COBRA and FSA Administrator, an insurance company, and a large brokerage, Ryan realized that there were more unique and creative solutions for businesses than other companies were willing or able to realize. Seizing on his own entrepreneurial spirit, Ryan set out to found an independent agency designed to provide unique and original insurance solutions. To learn more about HBC, visit https://hollowaybenefitconcepts.com/